How to Be the Biggest Google AdWords Advertising Loser

What makes someone the biggest Google AdWords advertising loser? What is the criteria?

What are the most unforgivably stupid things or unforgivably inexperienced things that advertisers do with their campaigns which immediately puts them in the running for the title of biggest Google AdWords advertising loser? 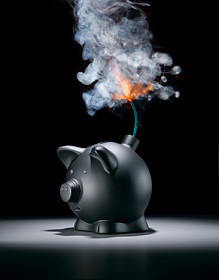 1. Set all keywords to broad match.

If you want to be the biggest Google AdWords advertising loser, make sure that all of your keywords are set to broad match. That way you will be competing on keywords with lots of competition from other advertisers. You will also be competing on keywords that draw in a huge amount of very broad traffic and which probably attract people who aren’t really interested in your products or services.

The biggest Google AdWords advertising losers always use broad match keywords and nothing else. It is the best way to lose money and avoid attracting the target audience desired that I know of.

2. Create 10 advertisements that are almost identical.

3. Use flash on all of your landing pages.

Flash landing pages hardly ever convert. They take so long to load sometimes that many people just click on the back button, return to the search page and select another advertisement to click on. You can be the best Google AdWords advertising loser within a very short space of time with flash loading pages.

4. Spend more money when ROI is down.

If your Google AdWords advertising campaign is not making any money, the best thing to do is to put more money into it. That way, the mistakes you are already making with your campaign can continue with even more money thrown at it so that the whole thing can go even more wrong.