It happened sooner than expected while no account manager was really aware of it: you have now the ability to create new expanded ads in AdWords.

How to create new expanded ads?

As you probably know already, those new expanded ads contain:

You can now create new expanded ads directly through your AdWords interface. If you go on the “Ads” tab on your AdWords account and choose to create a new ad by clicking on the red button “+ AD” and you then select “Text ad” in the drop-down menu, this will automatically give you the opportunity to create a new expanded ad as you can see in the screenshot hereunder. If you want to create an ad with the old format instead, you will need to click on the option “Switch back to standard text ads”. 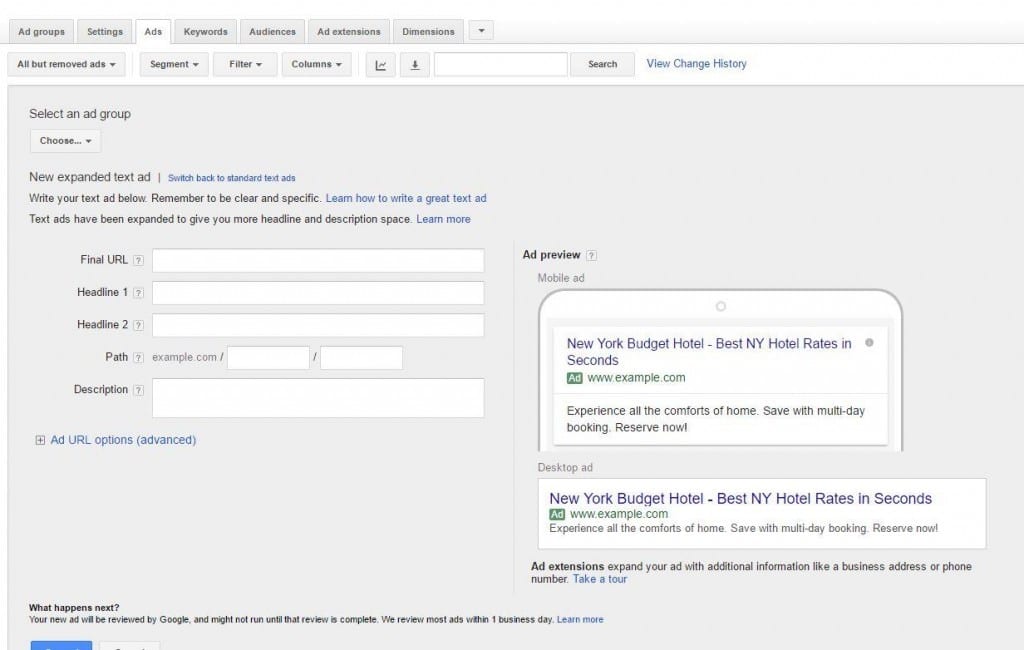 Google has also released a new version of AdWords Editor for the occasion, and if you download the latest update of Editor you will be able to create new expanded ads straight away (I have to say that Google really made a huge effort here to make it easy for account managers as you usually need to wait a few weeks or even months for any new change to be supported in AdWords Editor). Once the latest version is installed, you will see “Expanded text ads” listed under the “Ads” menu as you can see in the screenshot hereunder.

What is the deadline to create new expanded ads and what is going to happen during the transition period?

We are now in a transition period where you can still create and edit old AdWords text ads until 26th October. After that date, you won’t be able to create or edit those old ads anymore, so it will be mandatory to use expanded ads if you want to change messaging or create new ads. However, it doesn’t mean that your old ads will stop showing after 26th October, they might still run for a while along new expanded ads (no extra information has been given yet about what will happen to old ads after 26th October, except that you won’t be able to update them anymore).

What is sure is that if you do create new expanded ads now, you can still keep your old ads running along with them, and I would advise you to do that so you can test new expanded ads and see what could be improved.

When should you create your new expanded ads?

Even if you technically can wait until 26th October to create new expanded ads, I would advise you to start creating them now and as soon as possible, for several reasons:

What are the best practices to write new expanded ads?

Here are a few tips to create new expanded ads:

Following the release of new expanded ads on the search network, Google has also announced that a new ad format will be ready for display soon: responsive ads.

As for the expanded ads on the search network, the new responsive ads on the display network will have more characters:

Those new responsive ads are rolling out at the moment, if they are not available in your account yet just be patient a few more weeks.